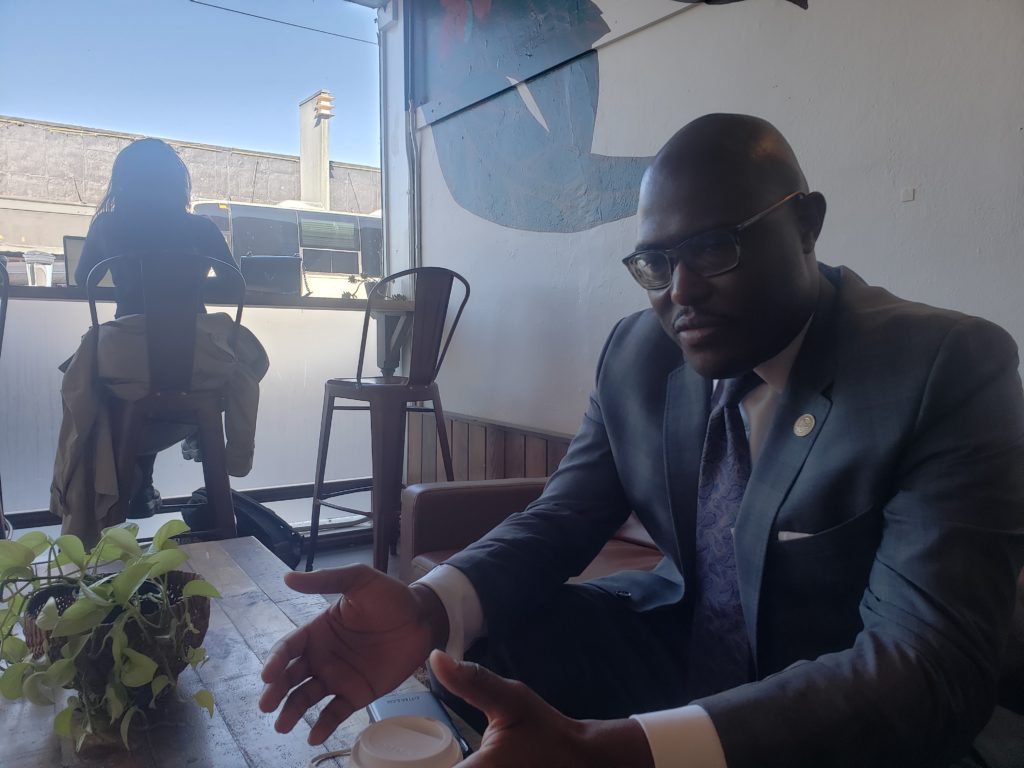 BCN Staff – March 30, 2022 — Over 3-1/2 years after becoming the city’s first Black mayor, Mayor Frank Scott. Jr. is taking over leadership of the nation’s largest organization that represents the top African American city leaders across the U.S.

On Friday, Scott was sworn in as the new President of the African American Mayors Association (AAMA), replacing the outgoing AAMA President Sylvester Turner, who has been the current executive officer of Houston since 2020.

Scott, who is running for reelection in November after his historic victory in the fall of 2018, said he was honored to elected as the incoming AAMA president. Today, the Washington, D.C.-based organization exclusively represents over 500 African-American mayors across the U.S.

“I am honored to be the African American Mayors Association’s incoming president. As laboratories of good governance, cities are at the forefront of efforts to improve quality of life and eliminate disparities across a host of life outcomes including economic security, public safety, affordable housing, and more,” Scott said in a statement. “As Black mayors, my colleagues and I hold a unique role in the policymaking process because we understand the challenges communities of color face in their pursuit of success. The pandemic exacerbated odds that have been stacked against people of color for far too long.

“As AAMA’s next president, I look forward to collaborating with my colleagues and our partners to dismantle the barriers currently making it impossible for everyone in our communities to thrive,” Scott promised.

At 38 years old, Scott will be the youngest-ever president of AAMA. A month ago, Scott delivered his third State of the City address today (March 28) at the city’s first Black chief executive. The annual address, entitled “Growing Forward,” returned to a live venue this year after being held virtually last year due to the COVID-19 pandemic. At the event, which was also livestreamed virtually across social media, Scott offered the city a post-pandemic way forward as one of the South’s top cities.

“Our city faced has faced historic challenges over the past two years, but we have overcome and thrived despite them,” said Scott. “Now is the time to be thinking ahead and planning for the next challenges. Now is the time not just to be growing, but growing forward, considering carefully how we can shape our city to be a place where opportunity abounds for all residents to live, work and enjoy everything Little Rock has to offer.”

“From climate justice to criminal justice, I am proud of the remarkable work we’ve accomplished together over the last year,” said Turner. “Our mayors in large and small cities across America combined forces to ensure that the success of our residents is a top priority for leaders across the government, business, philanthropy, and advocacy sectors. I look forward to continuing to help usher in a new paradigm for cities, with equity at the center, under Mayor Scott’s leadership.”

In recent weeks, AAMA backed the nomination and confirmation of U.S. Court of Appeals Judge Kentaji Brown Jackson’s to be the first Black woman to serve on the U.S. Supreme Court, and issued a statement of support for President Joe Biden’s $1.5 trillion discretionary budget for the upcoming fiscal year.

At home, Mayor Scott still has several priorities to attend before the stretch run between the May 24 primaries and the Nov. 8 election, including the revamping of his senior staff and key city issues such as crime and violence, law enforcement priorities, education and new LRSD superintendent, post-pandemic economic development, and future capital improvements.

Scott, who announced his reelection bid on Feb. 1 for a second term as the city’s first Black mayor, has retooled most of his top staff with only six months before the fall election. In late January, Scott named his longtime senior advisor Kendra Pruitt will now serve as chief of staff, replacing former legislator and Arkansas House Minority leader Charles Blake.

Blake resigned to pursue an opportunity in the private sector with Little Rock lobbying consultant Think Rubix, which Scott’s office recently hired to oversee the city’s plan for the upcoming LITFest and identify other programmin­g opportunit­ies for Little Rock, which now has a population of more than 202,000 people. Scott’s office has caught some criticism for the firm’s affiliation with Blake, who was hired only days after leaving the city’s employ.

To date, Steve Landers, Loretta Hendrix, Pamela Whitaker and Greg Henderson have also announced their intentions to run jump in the mayor’s race in the fall. Landers is the local businessman and auto dealer known for his humorous commercials. Hendrix is the daughter of the late Little Rock Ward 1 City Director Erma Hendrix, who died in September.

The filing deadline for this election is Aug. 10, 2022. The general election for mayor will be held on Nov. 8, and a runoff election is scheduled for Dec. 6, if necessary.

Get the latest sports news from SportsSite about soccer, football and tennis.